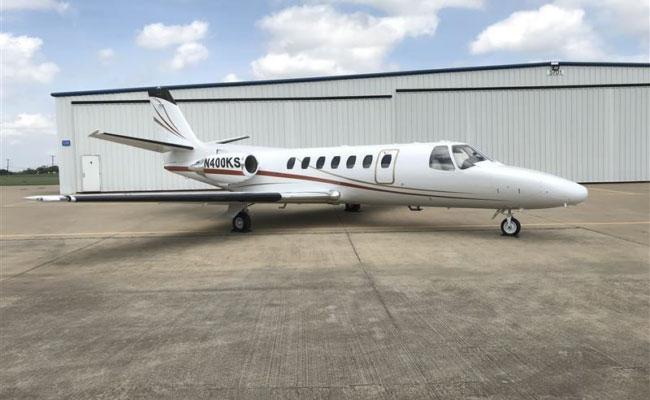 Interior
This Aircraft is one of the few Citation V’s with seating for (9) passengers. 9 seats with 2 club seating arrangement in Black leather with Tan accents, ultra-leather sides with suede headliner, 2 executive tables in rear club with full rear potty, an entertainment pyramid between clubs and refreshment bar forward with wine glass storage drawer including 8 crystal wine glasses included behind co-pilot, interior in very good condition.

The Cessna Citation V (Model 560) is a business jet built by Cessna, stretched from the Citation II. A prototype flew in August 1987, it was certified on December 9, 1988 and delivered from April 1987. The Citation V is a slightly stretched Citation II/SP, allowing a standard eight seats, with more powerful Pratt & Whitney Canada JT15D5A turbofans. The Model 560 variants are the fastest and farthest flying jets with the type certificate of the original Citation 500. The passenger cabin is 17.3 ft (5.3 m) long, 4.9 by 4.8 ft (149 by 146 cm) wide and high with a dropped aisle, has seven windows on each side and accommodates a four-seat club plus three chairs and a closed, belted lavatory.

View Dealer's Other Ads
Tell the dealer you saw this ad on AircraftDealer.com